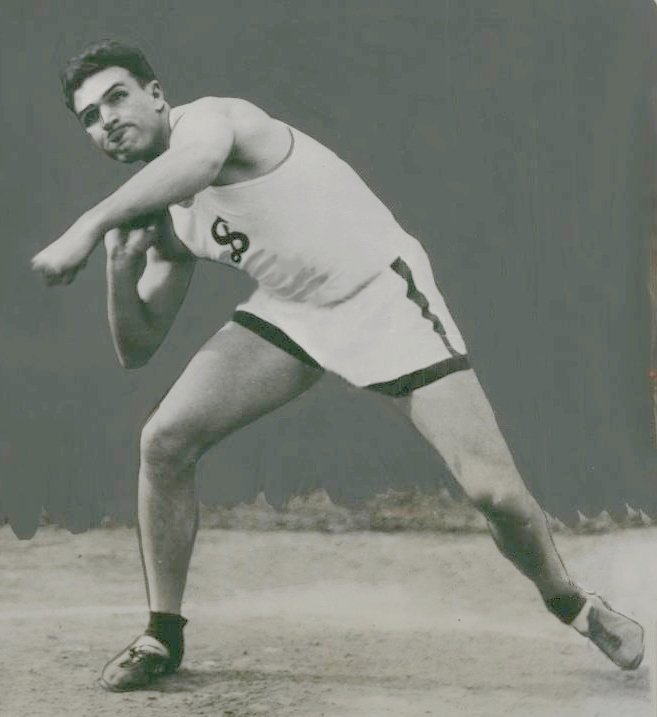 In July 1932, the Olympic torch was first lit at the Los Angeles Memorial Coliseum, which had been built for the Xth Olympiad. It was a bright spot for a world burdened in the throes of the Great Depression. And going into those Games, if there was a favorite from this area, it would have been pole vaulter Bill Graber ‘29. A graduate of Chaffey High School and USC, he set a world record in the U.S. trials at 14 feet, 4 3/8 inches using the rigid bamboo poles of those days.

But on August 3, 1932, on the floor of the Coliseum, things went very badly for Graber. “The Ontario youth couldn’t get his stride and his long bamboo pole synchronized,” lamented the Ontario Daily Report the next day. “He was just off form.” The best he could do was 13’ 7½ “for fourth place. Graber, who died in 1996, also vaulted in the 1936 Games in Berlin where he was fifth.

Another local in the 1932 Games was Nelson Gray, a shot putter born in Upland and a graduate of Chaffey High School (class unknown) and Stanford. His best effort in Los Angeles was 50’8 ¾” in the shot put – well below his personal best of nearly 52 feet – good for only fifth. Gray, who died in 1982, lived in Upland his whole life, except for military service, and at one time served on the Chaffey College board.

For visitors to the 1932 Games, sightseeing was something many got involved with, including those invited out to view the Inland Valley’s vast agricultural bounty. A couple of hundred visitors came by bus touring Ontario, Upland and Fontana on August 5, 1932. Some stopped for punch at the Ontario home of J.S. Armstrong of Armstrong Nurseries. Francois Biane of the Biane wine-making family entertained seven French athletes at lunch one day in Cucamonga and then took them on a tour of his wineries.

When the 1932 Olympics finally ended, even those who went home without a medal had plenty of memories of being on the international sports stage. But there was one Chaffey High graduate who could only wonder what might have been. He was Ernie Payne ‘25, who later spent 38 years as a teacher, administrator and principal at Chaffey High School. In 1931 he was one of the nation’s top athletes, holding the national college record in the 200-yard low hurdles. His plans were to train for the Olympics in the 400 lows while coaching Chaffey’s track team.

However, in those days the Olympics were strict about only allowing amateurs to participate. Their definition of “amateur” was stretched as far as it could. For Payne, it went a bit too far, especially by today’s standards. “He had run the fastest time in the world in 1931,” said his son, Kenneth Payne ‘59, in a 2001 interview. “But because he was coaching the CHS track team, they said he was a professional and disqualified him from competing.” Payne, who died in 2001, did make it to the Coliseum for the 1932 Games – working as a ticket-taker.