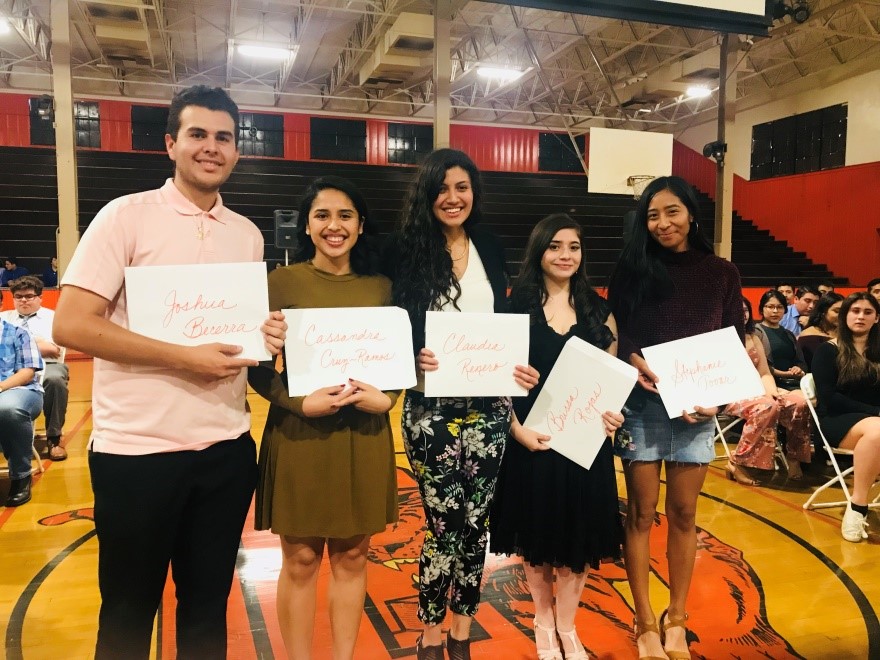 In May 2018 at the Senior Awards Assembly, CHSAA awarded five $1000 scholarships to graduating seniors. Applicants were required to complete an application form, submit a high school transcript, provide two letters of recommendation, and provide a statement of career goals and summary of extracurricular and volunteer activities.

In May 2018 at the Senior Awards Assembly, CHSAA awarded five $1000 scholarships to graduating seniors. Applicants were required to complete an application form, submit a high school transcript, provide two letters of recommendation, and provide a statement of career goals and summary of extracurricular and volunteer activities.

Joshua Alexander Becerra ‘18 is ready for the next step in his life — college One of his teachers said Joshua’s goal is excellence in everything he does. Another said he is in the top 1% who works hard, perseveres and has high academic ability. Dave Masterson, CHS Theater Arts teacher, said Joshua was invaluable this year. Joshua was on the Principal’s Honor Roll all four years, ASB Vice President, Student of the Month, served on the School Site Council and was Prom King. He excels at golf, serving as captain of the golf team, Mt. Baldy League Top 5 student athlete, and was All-CIF in golf. In his junior year, Joshua advanced to CIF, the first CHS golfer to do this.

Joshua says CHS helped expand his horizons and take advantage of every opportunity that came his way. He will attend Cal State LA and major in mathematics. He hopes to become an Encore Tiger by returning to CHS as a math teacher. His goal is to have a positive impact on children.

Cassandra Cruz-Ramos is a very successful student. Her teachers say she has a strong commitment to be academically successful and is a leader in her class. One teacher described Cassandra as a “teacher’s dream student.” Cassandra was on the Principal’s Honor Roll all four years, Senior Class President, on the Fasti staff and Link Crew (a campus club that works with incoming freshmen), Student of the Month for French, History and the Lion’s Club and a member of Earth Club and Kiwins service club. She participated in the job shadowing program at UC Irvine where she worked with Dr. Laham.

Cassandra will attend UCLA, majoring in biology/pre-med. Her career goal it to be an emergency room doctor. Cassandra said, “Chaffey has been a place where teachers have encouraged me to be successful. I feel I have had a great education and I have grown and learned from my time here.”

Claudia Agueda Renero is a leader in words and action as an advocate for those voices that are unheard. She was born in Mexico and her family was very poor. When her father died, the family came to the United States. Claudia’s mother and brother were eventually deported, though she remained in the United States. Claudia has been on the Principal’s Honor Roll for three years and is a member of MECHA, Key Club, Computer Science Club and the Toyota Mentorship Program. She speaks fluent English and Spanish and is proficient in Portuguese.

Claudia says Chaffey High School made all the difference in her life’s dream. She will attend Cal Berkeley to study engineering. Her career goal is to open a sustainable robotics company that uses its proceeds to support those in need.

Brissa Rojas is very focused on her future path. She is a kind and a giving person who served as president of the Best Buddies Club that pairs the regular students with a Special Needs student. She was on the Principal’s Honor Roll all four years, took Honors and AP classes, and served on the State Superintendent of School’s Student Advisory Council. She was treasurer of the Renaissance Club and served on the Student Advisory Council for Promise Scholars.

Brissa speaks Spanish, English and ASL (American Sign Language). She says Chaffey had a big impact on her life as her teachers exhibited kindness and care and helped mold her personality. She will attend UC Riverside and major in Spanish. Like Joshua, Brissa’s goal is to become an Encore Tiger, returning to CHS to teach Spanish.

Stephanie Tovar is the first in her family to graduate from high school and attend college, which fulfills her goal and her parent’s dream for her. Her teachers say she is dedicated, respectful, intelligent, and a positive team player. Stephanie is an athlete — she was on the cross country and track team all four years, serving as team captain as a senior. She volunteered with the Think Together program helping small children with arts and crafts, Megan’s Wings Race for the Cure, ran the 5K Reindeer Run for Promise Scholars and volunteered at Central School Language Academy.

Stephanie credits her success at CHS to support of her teachers and counselors. She was granted admission to six colleges and selected UC San Diego. She will major in kinesiology/engineering with two possible career goals: either a physical therapist or a civil engineer.