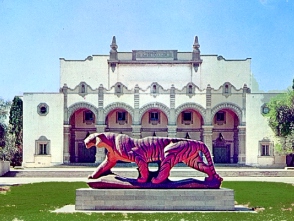 The site selected for the auditorium was the chapel of the original agricultural college founded by George W. Chaffey which was frequently used as a community meeting place. Under the direction of Merton E. Hill, the chapel was incorporated into a new auditorium built in 1912. This building was razed in 1935 to make way for the new auditorium, though the Austin console organ was saved for installation in the new auditorium, once complete.

Construction began on February 1, 1938 and was completed on March 16, 1939. Superintendent Gardiner W. Spring presided at the groundbreaking ceremony. Excavation by steam-shovel was the first task, followed by the cement foundation and steel framing for wall supports. A 32-ton steel support beam as long as the auditorium is wide was erected by crane to support the balcony. Next the classrooms, stage and walls were built; scaffolding was erected so interior walls and the ceiling could be painted. Installation of stage lights, sound and public address equipment, projectors, flood lights and auditorium seats completed the construction. The auditorium was designed to resist all but the most violent earthquake. Of Class A construction, the auditorium rests on structural steel supports and is buttressed by exposed reinforced concrete. The steel allows for a certain amount of give within the walls themselves. The building is completely fireproof.

Backstage in the auditorium are the switchboard that controls house and stage lights; huge wings; curtains and backdrops; a motion picture screen and amplifying equipment; asbestos fire curtain; and steel fire doors. Downstairs at the sides of the stage are ten dressing rooms, each equipped with a wash stand, ret room, dressing table with three small lamps and a monitor speaking instrument for calls from the stage.

Across the hallway at the rear of the orchestra pit and directly below the stage is a sound-proof tune-up room for musicians so they can tune their instruments without being heard by the audience. There is also a smaller adjoining room for storing instruments.

The projection booth, a cubicle at the top of the balcony with small glass windows, is full of modern equipment. The organ loft is located in the attic, aboaut four stories above the ground. Declared on of the finest organs in the country by its staller, the organ is one of the few reminders of the old auditorium as it was used there. Completely renovated and located in two specially-built rooms, the organ can be maintained in a constant air pressure while in use.

The auditorium ventilating system is in the basement, beneath the foyer. Two huge fans circulate and recirculate air. One brings in outside air, filters it clean of dirt and dust particles through a screen of steel wool, and projects it into the auditorium. The other takes air from the exhaust of the major fan and recirculates it. Heat is supplied by automatic heaters which can be controlled by a thermostat.

The two wings of the building hold college and high school classrooms for a cappella choir, dramatics, glee clubs and other classes. The a cappella room is complete soundproofed and has a small room adjacent that resembles a radio studio control booth.

Dramatists have a small practice stage complete with stage lights and two small spotlights. Other classrooms are outfitted similarly and all have outside entrances.

The foyer carpet is teal blue and the walls are ivory. The electric fixtures are hand-wrought brass. The loggia ceiling and interiors of the boxes are dusky pink. The seats are maroon velour. The speakers’ curtain is deep sapphire blue; the stage curtain is gold damask, and the taupe fire curtain features the colors of the other two curtains in its trimmings. The north end of the foyer has a hat check room. The wide staircase ascends to the mezzanine and passageway to the balcony. The mezzanine floor has ladies’ and gentlemen’s lounges and chairs and lounging settees.

The auditorium ceiling, painted in three shades of blue ranging from light blue at the lowest parts of the mural, graduating to a deeper blue at the center, features a mural of mythical figures. The artist, E. Petersen, had to deal with a difficult perspective problem because of the curvature of the ceiling. He solved the problem by placing the small but important figures below the curved part of the wall where the surface is flat. Trees, shrubbery and general background were painted high into the curvature, giving the effect of overhanging trees. The sweeping lines of the tree trunks and foliage carry the eye up the walls to the mythical characters and idyllic visions of antiquity. Small, powerful spotlights placed at intervals in the ceiling give the effect of a star-studded sky through the limbs and foliage of the trees.

The auditorium has ample parking on Fifth Street and a passenger loading zone in close proximity on the north side. Additional parking is available in a parking lot off Fourth Street.

The opening program for the auditorium on March 17, 1939 began with a dedication ceremony with Gardiner W. Spring serving as master of ceremonies. Dr. Walter F. Dexter, California’s state superintendent of public instruction and former president of Whittier College was the main speaker. Music was provided by the Chaffey symphony orchestra under the direction of Ralph Streano. The audience sang America under the direction of S. Earle Blakeslee with Mrs. Earl Johnston at the organ console. The invocation was provided by Reverend John A. Macdonald, pastor of the Fontana Community Church. Herbert S. Bailey, a member of the board of trustees and chairman of the building committee spoke, followed by K.A. Godwin, regional director of the Public Works Administration.

Members of the Native Daughters of the Golden West provided a special flag charge and presented an American flag to be hung in the auditorium which was accepted by John Chapman, a high school student. N.E. Trautman, president of the Chaffey board of trustees dedicated the auditorium, then Merle Chamberlin, head projectionist for Metro-Goldwyn-Mayer studios, demonstrated the projection and sound equipment. The ceremonies closed with the a cappella choir singing Glory to God in the Highest by Bortniansky and the entire audience joining to sing The Star-Spangled Banner accompanied by the symphony orchestra.