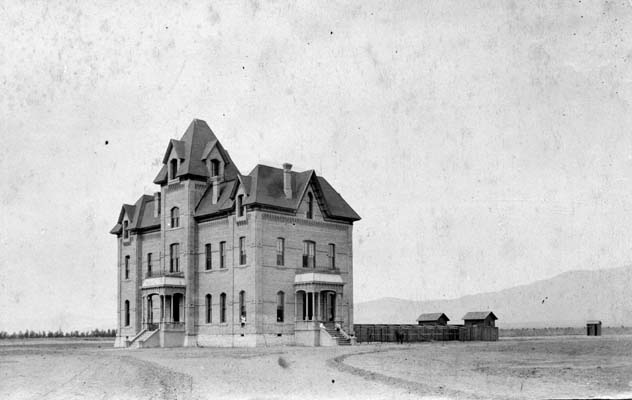 Although Chaffey College remained a draw to attract settlers, it ceased to exist when USC readjusted its affairs. A school district was organized in 1901 and Ontario High School students used the college buildings while a new high school building was constructed.

Ontario Model Colony founder George Chaffey’s plan for Ontario embodied four concepts that were incorporated into all land sale contracts: distribution of water rights to all landowners; construction of what became Euclid Avenue for beauty; provision for a college (the precursor of Chaffey High School) to teach agriculture and general education; and using prohibition to attract temperate settlers.

In 1882, the first year of the Model Colony, George Chaffey had already set aside a 20-acre site at the corner of Euclid Avenue and Fourth Street for an agricultural college. Chaffey established a trust fund for the college and arranged for the University of Southern California (USC) to supervise the trust and develop the college’s building plans.

The cornerstone for Chaffey College was laid on March 17, 1883, even though Ontario was virtually uninhabited. George Chaffey used the occasion to stage a media event designed to encourage land purchase. Five hundred people attended the event.

When completed, Chaffey College had 15 classrooms, a chapel, a library, and two dormitories. It had cost $17,000 to construct. By operating as a private boarding school, Chaffey College had by 1885 attracted 15 students and a faculty of three. Curriculum consisted of high school courses; students came from outlying areas (such as Riverside and Hemet) which lacked public schools. The campus stressed its moral atmosphere, and students were required to attend daily devotionals.

Although Chaffey College remained a draw to attract settlers, it ceased to exist when USC readjusted its affairs. A school district was organized in 1901 and Ontario High School students used the college buildings while a new high school building was constructed.

However, by 1911 the high school had outgrown the new facility and citizens of Ontario and Upland decided in May 1911 to unite to form a unified high school district. A 14-acre campus, an endowment fund of $75,000, and a six-acre experimental orange grove were the district’s first assets. In August 1911 a bond of $200,000 was sought to erect buildings and equip the new district.

The first three buildings–Science (laboratory and domestic); Liberal Arts (consisting of a library and auditorium remodeled from the old Chaffey College building); and Mechanical Arts (to house the heating plant or boiler room) were planned for the 1912/13 school year. Merton E. Hill was the first principal of Chaffey High School and the first superintendent of the Chaffey High School District, serving concurrently from 1911 to 1932.

In 1919 the Chaffey Junior College of Agriculture was organized. In its earliest days the junior college had no physical identity. Its students attended classes in the buildings erected for the high school, taught by instructors who gave part of their time to the high school curriculum.

From 1913 to 1933 there were several additions to the campus–reconstruction of the Science Building (damaged by fire in 1913); swimming pool (1916, originally called “the plunge”); Austin pipe organ (1920, a gift of CHA music teacher Mrs. Mary LeDuc Chapin); Home Economics Building (1922, constructed from 1920 bond money); Graber Field (1928, named in honor of Clifford C. Graber, member of the Chaffey Board of Trustees from 1911 to 1932); the first junior college building (1930, later named Tower Hall); and the patio on the junior college campus (1932, palm trees donated by Charles Booth).

In 1930 construction was started on a building to house separately the students of Chaffey Junior College. The first unit for the junior college was completed in March 1931; the second unit in February 1932. In 1934 Chaffey Junior College introduced an aeronautics vocational program–the first large-scale vocational program other than agriculture and commerce to be added to the curriculum.

On March 10,1933, the Long Beach earthquake shook Ontario. The quake was severe enough to damage most of the buildings on the high school and junior college campus, resulting in the condemnation of all the high school buildings. This disaster occurred in the midst of the Great Depression when the school district was in dire financial condition. Twenty-six percent of the district’s taxes were unpaid, and an extreme cost-and salary-cutting program left just enough money for salaries–not for new buildings.

In 1947 the Mechanical Arts Building, which contained the student store and snack bar, burned, leaving only the boiler room. Bungalows to serve as additional classrooms were set up in 1947 (and became the site of a portable building that served as the Art Annex from 1965 to 1977). The Agriculture Building (West Hall) was completed in 1949. A new student union (high school on the first floor, junior college on the second), student store, and cafeteria were dedicated in 1950, along with a new Home Economics Building. The first student function held in the building was the Spring Formal in May 1950. In 1951 the residence of Alexander Minton at 126 West 5th Street was purchased and remodeled to serve as a nurse’s cottage for the junior college.

A bond issue election in 1955 provoked a public feud between Daniel Milliken, the school superintendent, and Jerene Appleby Harnish, editor of the Daily Report, who alleged incompetence by the board of education. (A commission later exonerated the board of all charges.) In 1956 a team from UCLA recommended separating the two campuses and an enabling bond issue was passed. In January 1960 the junior college moved to its new campus at Haven Avenue just above Highland Avenue in Alta Loma and the high school took over its building (Tower Hall).

In 1962 there were 19 elementary schools and four junior high schools feeding into Chaffey High School. Feeder school enrollment continued to climb and by 1970 there were 36 schools with an enrollment of 18,000 students. Thereafter, enrollment stabilized and even decreased.

The last buildings to be constructed on campus were the track storage building (1973), Math/Science Building and locker complex (1975–lockers were removed in 1981), and Dominga High School, a special education campus originally called the Chaffey Training Center (1978). (The agricultural department residence at 557 West 5th Street was torn down to complete Dominga.)

In 1977 the Chaffey Tiger sculpture commissioned by the Class of 1960 and executed by Betty Davenport Ford ’42 was maliciously attacked and extensively damaged. From April 1977 to December 1978 the tiger was encased in a plywood structure; then it was moved to the foyer of Gardiner Spring Auditorium so Mrs. Ford could begin repairs. After four years of restoration work, the tiger was installed on a new base, lighting was added, and a rail installed around it. The restored tiger was displayed for the baccalaureate service in 1982 and has been in Gardiner Spring Auditorium ever since.

As needed, buildings have been improved over the years. The basement of South Hall was remodeled for the Art Department in 1977. Restoration of Gardiner W. Spring Auditorium was started in 1985 and continues today. Air conditioning was added to the Chaffey Memorial Library in 1986 and to North Hall in 1987. The boiler room, which served as a kind of campus billboard, was dismantled in 1989. The turf and track on Graber Field were renovated in 1994. The floor of the basketball court in the boys’ gymnasium was completely removed and replaced in 1997. The swimming pool was completely rebuilt in 1998, and Dominga High School was renamed Canyon View School and changed from special education to continuation high school.

As it has since its founding in 1911, Chaffey High School continues to fulfill the vision of George Chaffey to provide education for Ontario’s families.