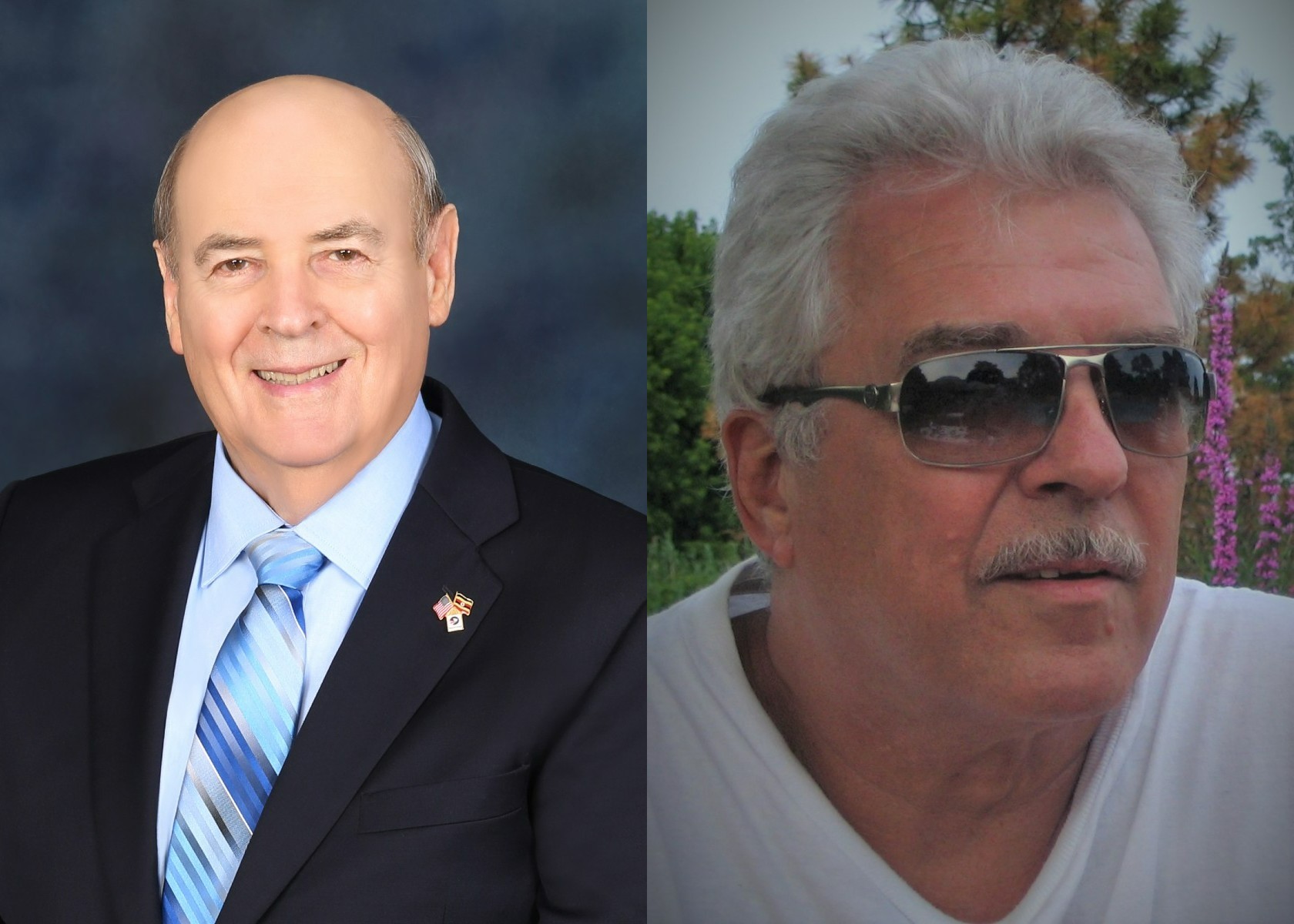 The Board of Directors of the Chaffey High School Alumni Association announces that Leland Tipton, Class of 1959 and C. Douglas Ades, Class of 1960, have been selected as the co-Tigers of the Year for 2021. Judge Tipton was nominated by his siblings, Margaret-Ann Tipton Mitchell ’69 and Howard D. Tipton ’54 in 2016. Douglas Ades was nominated by his classmate Alan Haskvitz ’60 and 1992 Tiger of the Year in 2017.

Leland Tipton is an attorney and Superior Court judge for the County of Los Angeles. Following graduation from CHS, Leland attended the University of Redlands on a Cal Grant award, graduating in cum laude in 1963 with a major in government. He graduated from the UCLA School of Law in 1966 in the upper 10% of his class, earning his Juris Doctor degree. He passed the California bar exam on his first attempt. Because he and his wife Mary Ann had joined the US Peace Corps, he took his oath at the American Embassy in Kampala, Uganda, Africa. For a year, Leland and Mary Ann taught at a secondary school, then became headmasters for another year.

While in Uganda, Leland and Mary learned of an 18-month old girl in an orphanage who, for various reasons related to the beliefs and practices of the indigenous people, could not be adopted. Leland and Mary persevered over many months of getting past obstacles, until they were able to adopt the toddler. Later they adopted another daughter, a 2 year old, to complete their family.

Despite being courted by major corporations and law firms, Leland decided to join the public defender’s office of the County of Los Angeles. He was determined to continue his commitment, begun in Africa, to underprivileged populations. For the next 16 years, until 1987, he served first as a trial lawyer, and later as the deputy-in-charge of both the Cerritos and Compton Municipal Court deputy public defenders. The judges of the court elected Leland to be municipal court commissioner in 1987 for the district including Lakewood, Cerritos, Bellflower, Artesia and Hawaiian Gardens.

Leland successfully ran for Municipal Court Judge in 1997, and during the next three years, was twice elected presiding judge. When the Los Angeles County Municipal and Superior Courts were unified in 2000, Leland was elevated to Superior Court. He remained in this position until his retirement in 2016 at age 75 and after 30 years on the bench. He delayed his retirement in order to provide financial assistance to his daughters, who were both raising children with developmental disabilities (schizophrenia and autism).

Leland has an extensive knowledge of Greek mythology. He researched weather patterns, navigational charts and events of the time periods of mythological characters, and from this he wrote two books – Jupiter Rising in Aries (The Virgin Conspiracy), 2014 and Anger of Athena, 2015.

Leland and Mary Ann are long-time members of CHSAA. While attending CHS, Leland was active with Latin Club, Achilles Hi-Y and a member of the varsity track team his senior year.

When I think of my brother, I am immediately flushed with a sense of awe and admiration for his intellect, filled with pride for his many selfless acts to help others, and overcome with appreciation for his role modeling that so often gave me the strength to persevere in my darkest hour. He has the brain of an intellectual that he has dedicated to scholarly endeavors; the heart of a missionary that he has tirelessly devoted to the underdog; the soul of an activist that he has committed to staying involved in the fight for justice; and a moral code to which I have never seen him betray: to love his wife and his family unconditionally at all costs, and to serve his community with his last breath.

In 2014, after a lifetime of assisting the underserved and finding funding for those interested in bettering themselves, Douglas Ades was awarded one of the highest honors a foreigner can receive – the Officer’s Cross of the Order of Merit of the Republic of Poland. Doug traveled to Poland in May 2014 to receive his award from the President of Poland. It was a fitting honor for a man who spent his entire career building organizations to help others.

Doug is a financial consultant by training. After graduating from CHS, he attended Chaffey College and the University of Redlands, then continued his education via a Rockefeller Fellowship for study at Union Theological seminary in New York City. While there, he worked with Street Academies in Harlem, an organization that helps street gang members and heroin addicts. Thus began his lifelong practice of helping others.

Doug was named vice president of corporate social policy at Chemical Bank, which led to being asked to join the board of Antioch College. The college awarded him a honorary doctorate in 1982 in recognition of his service; his co-recipient was Coretta Scott King.

Continuing his focus on using financial tools to serve disadvantaged communities, Doug founded a consulting company. In 1982 he helped start the National Center for Social Entrepreneurship.

When Poland voted to end Communist rule in 1989, Doug was appointed senior advisor of the Polish-American Enterprise Fund (PAEF) to help jump-start the Polish economy, charged with responsibility for $240 million for this purpose. He helped establish Polish-American Enterprise Clubs in 16 major cities, and assisted with establishing small loan programs, microbusiness funding for women-owned businesses in rural Poland, and developed a management system for an investment operation that became Enterprise Investors (with investment capital of two billion euros).

In 1998, the Polish government and US Congress determined that Doug’s early efforts with the PAEF had been successful and that the $240 million seed money would be split between the US and Poland. This was the first time in history that a USAID-funded program ever returned money, and the first time it had to establish Accounts Receivable.

PAEF tapped Doug to establish a new foundation, the Polish-American Freedom Fund (PAFF) which was recognized by US Secretary of State Madeleine Albright. Doug was elected to the board of advisors (which also included Zbigniew Brzezkinski) where he served as secretary. PAFF’s endowment now totals $280 million and is engaging in creative activities related to education, community development and a program to help libraries in small towns and villages become community IT centers. This program was established in conjunction with the Bill and Melinda Gates Foundation.

Beginning in 1997, Doug worked turn a quarry owned by PAEF into a memorial site. During World War II, the quarry had been part of a concentration camp where 40,000 people were worked to death. After eight years of effort, the site was given to the Gross-Rosen museum which manages the site as a museum.

Doug Ades has spent a lifetime helping those in need, and he has done it successfully. He sacrifices for others using his abilities to help thousands all over the world, whether it be for better health services, advocating for small businesses, or helping preserve a concentration camp site so that others could see and learn first-hand about the atrocities. I feel that Doug encompasses what being a Chaffey Tiger is about, and that is caring for others, commitment to a just cause, and the ability to take learning and apply it to the betterment of mankind.