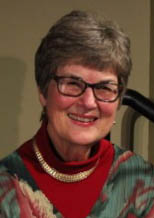 Nancy's early careers included medical transcription at Santa Barbara County Hospital and technical writing for SysteMetrics, a health care research company in Santa Barbara. In 1981 she returned to Ontario to join her parents, Helen and Jerry DeDiemar, in their printing business.

The Board of Directors of the Chaffey High School Alumni Association announces that Nancy DeDiemar Jones, Class of 1963, has been selected as the 2017 Tiger of the Year. Nancy was nominated by Dale ’58 and Judy Haskvitz Briggs ’62 in 2017 and previously by Al Raddi ’63, John Navarro ’69 and Lance McCullough ’81.

After graduating from Chaffey, Nancy continued her education at University of California at Riverside and graduated from UCLA in 1968 with a bachelor’s degree in English Literature.

Nancy’s early careers included medical transcription at Santa Barbara County Hospital and technical writing for SysteMetrics, a health care research company in Santa Barbara. In 1981 she returned to Ontario to join her parents, Helen and Jerry DeDiemar, in their printing business (first called Helen’s Place Printing, later renamed Printing Resources of Southern California). Nancy found her career calling as the second-generation owner of this small, family-based business. After 30 years as a business owner, she retired in 2011 after successfully transitioning the business to a new owner. The business is still operating, having just ended its 46th year of existence.

During her career Nancy was active in many printing industry organizations. Beginning in 1983, Nancy began a series of positions within the local chapter of the National Association of Quick Printers. She founded NAQP’s  Mailing Services Group, served on the national board of directors, and was elected national president in 1996. She was an acknowledged industry expert on mailing services in print shops and was a columnist for several industry magazines. In 1997 she was named Quick Printer of the Year by NAQP members. From 19xx to 2015, Nancy and her husband co-published a subscription-based industry newsletter called Printips.

During her career, Nancy served a number of community organizations as a volunteer. Since retiring, she has become much more active as a community volunteer. She serves as a planning commissioner for the City of Ontario; board chair of the Chaffey Community Museum of Art; treasurer for OPARC,  president of the Chaffey High School Alumni Association and editor of the Tiger Rag newsletter; board member of the San Antonio Hospital Foundation, and board member of the Coy D. Estes Apartments.

Nancy will deliver an inspirational message to the CHS Class of 2017 at its Baccalaureate Service on May 21, 2017. This will be followed by a reception in her honor on campus.