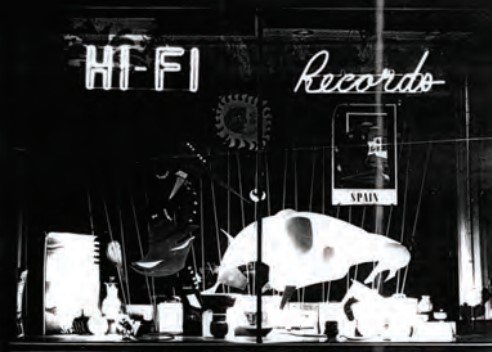 Rudi Pock’s, there was a certain smell to the place, probably from a combination of paper record jackets, album covers and an admixture of fumes from the records and vinyl. - Vern Kerr

Vernon Kerr ’61 has been interested in writing since he was on the Tiger Rag staff at CHS. Calling himself “an amateur author, literary critic and poet”, Vern, writes a blog about his passions, which includes nostalgia for Ontario. He has offered to share his nostalgia with CHS alumni in the Tiger Rag.

A couple of my fondest memories of growing up in Ontario in the 50s involved music. The first is watching American Bandstand after school, after having come home from Vina Danks Junior High or Chaffey High School. As an Ontario daily Report newsboy, I would arrive home, drag the big wire-bound bundles of papers into the living room, and watch Bandstand as I folded each copy of The Report into a rubber-banded, easily-throwable unit. While a lot of my girl classmates watched Bandstand for the girl-boy interactions and the unfolding romances – they seemed to know the names of all those kids, 2,800 miles away in Philly – I watched it for the music.

While watching and folding, whenever I heard a new record that appealed to me, I would take a little of my paper route money and make a beeline for Rudi Pock’s Hi-Fi, on Euclid Avenue. Rudi Pock’s was the venue of my second fondest memory. There was a certain smell to the place, probably from a combination of paper record jackets, album covers and an admixture of fumes from the hard-rubber 78 rpm records and the newer vinyl, 45s and 33s. And I remember the hosts, Rudi and Lena Pock. The picture shows them holding-forth behind the counter, sometime in the mid-50s. Always there to direct one to the proper bin or even offer suggestions, Rudi and Lena helped to make the place the go-to stop for teenagers.

One purchase-suggestion for me made by Lena, now that I look back on it, was a bit of reverse-psychology. Picking up an LP with a picture of Lionel Hampton on the vibes from a bin marked sale, I thought, “Hmm, 50 cents, might be worth a try.” “You wouldn’t appreciate that,” Lena said. “Oh, a bit before my time, eh? I asked. “No, a little beyond your time. It’s Progressive Jazz.”

The gauntlet was down. “Well, I think I’ll go ahead and take it”. I took it home, queued it up and listened, and listened, and listened – but it didn’t make sense. In the following weeks, I stubbornly listened more, in an effort to prove Lena wrong. Finally, something clicked. I began to enjoy it and I’ve had a love for modern jazz, ever since. Here is a picture of the actual album, which is still in my collection.

Strange, how one small incident, like a random trip to Rudi Pock’s, can wind up enriching your life forever. Four years ago, at the CHS ’61 55-year reunion, I was able to relate this incident to my classmate, Carl Pock’61 (Lena and Rudi’s son). Now I’m happy to be able to relate it to you, my other fellow alumni.