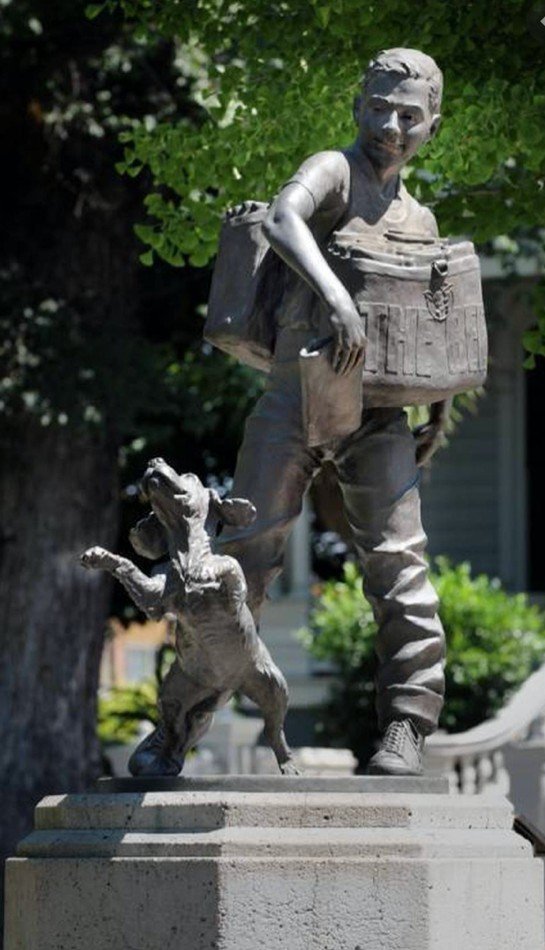 The Ontario Daily Report: Incubator for the Work Ethic

Growing up in Ontario in the 1950s, our neighborhood gang of boys was blessed to have two major influences for a happy future life: the Boy Scouts and the Ontario Daily Report which allowed us to layer on some real-life work experience. - Vern Kerr

Vern Kerr ’61 has been interested in writing since he was on the Tiger Rag staff at CHS.  Calling himself “an amateur author, literary critic and poet”, Vern blogs about his passions, which includes nostalgia for Ontario.

Growing up in Ontario in the 1950s, our neighborhood gang of boys was blessed to have two major influences for a happy future life: the Boy Scouts and the Ontario Daily Report. From our old Boy Scout troop, Ontario Troop 11, we learned the fun of camping, of teamwork, of the sense of accomplishment gained from earning higher rank and merit badges and – most importantly– the moral values inculcated from the Scout Oath, the Scout Motto and BSA’s focus on serving others.

On top of the moral foundation laid down by the Scouts, our working for The Daily Report allowed us to layer on some real-life work experience. What better learning environment for an eleven-year-old than having to deal with adults in a service-provider/customer relationship? But,  bless them, other than a few grumpy customers and someone on Orchard Lane, from whom I had unwittingly collected two silvery,  quarter-sized Mexican centavo-pieces, the adults were great. I especially remember one lady, who – after my fumbling with my very first changemaking attempt, coins rolling off her porch – stood and patiently taught me the secret of changemaking:   “Count backward from the $1.40 subscription price, until you get to the five or ten-dollar bill handed you by your customer.” She made me do it a couple of times until I got the hang of it.

But, no matter how many grumpy or larcenous customers, no matter how heavy those canvas bags of Thursday papers (the ones with the inserts and coupons), no matter how many mis-thrown “roofed” papers that had to be fished off the top of a customer’s porch, no matter how groggy we were at 4:30 am on Sunday, with the petroleum-based printer’s ink burning our eyes and blackening our hands and clothes—the greatest lesson we learned was that work could be fun – especially when shared with other boys. The spending-money was a plus too. There’s no denying that.

My own experience at The Report spanned through Vina F. Danks Junior High, through Chaffey High School and on to Chaffey College. From chucking newspapers from my bike in junior high, to an evening job selling subscriptions to The Report in high school,  to sailing folded papers through my open car windows on an auto route and then, managing a crew of high school “solicitors” in college, we always had fun; albeit, sometimes mischievous fun ( nothing serious I assure you).

Part of The Daily Report’s method of motivating carriers was to have many contests: contests for cool prizes, contests for trips, contests for free dinners. There were trips to Disneyland, the Long Beach Pike, Knotts Berry Farm, Catalina Island. One “premium experience” provided for us makes me laugh even now. It was a dinner at the swank Sycamore Inn, near the Red Hill Country Club. I can’t imagine what the well-heeled customers thought, seeing ten or twelve boys, arrayed across several tables, most probably dressed like waifs from Oliver Twist, sipping soup while their adult manager tried to maintain order and quell the chatter a bit.

When I was thinking of writing this piece, I asked my brother Steve ’64, who was one of our Daily Report gang, to send me some of his memories. Rather than only using them for source material, I think the reader would enjoy reading Steve’s reminiscences in his own words:

Working for the Daily Report wasn’t just work for a kid. It was also fun. My older brother Vern had a paper route that encircled our home, which is an ideal route because when you leave your house, you start throwing papers right away. When he was promoted to a solicitor for new customers, I took over his route, in my sixth-grade summer.

Back in those days, not too many kids got an allowance. All of our buddies in the neighborhood saw that I was making some spending money and they wanted to get in on the deal as well. So when I heard of a route opening up, I would tell one of my buddies. Before you knew it, all of our friends in the neighborhood had a paper route.

In the summer months when the weather was nice, our boss would drop off the papers for all of us at John Galvin Park, on the corner of I Street and Cucamonga Avenue. We would all fold our papers there, which we called “the bundle-stop.” It was a lot of fun joking around while we folded our papers.

One very cool program of The Daily Report back then were special outings sponsored by the paper. The Daily Report was always trying to increase circulation. One program for paperboys (in those days they were all boys) was to earn a trip to Disneyland by signing up five new customers on their paper routes. The deal included bus transportation there and admission to the park. Once, The Report had a promotion for Catalina Island, which included the boat ride over, and one night in a motel. A lot of fond memories, working for The Daily Report.

And I could go on and on about my memories of working for The Report, too. There are so many. Some of the things we experienced would probably violate child-labor laws nowadays, like knocking doors at night, after school to sell subscriptions on dark streets in places like Fontana, Chino, Rubidoux or Pedley. Or working around machinery on the Circulation Department loading dock. But if the managers at The Report had asked any of our parents for permission, I‘m certain they would have approved. In a more balanced age, a little risk was worth the reward of learning a lifelong work ethic.